871 Company responses
10 Customer testimonials
Get a quote Call customer care
Write a review
A leading provider of installed home improvements and home furnishings for over 50 years in over 45 major metropolitan areas across the United States. Empire Today Customer Service Team is there to assist every customer - they want to hear when customers are happy and they want to hear if there are any concerns that need to be addressed. Prior to posting on this site, please contact a member of their Customer Service Team directly first, they can be reached by calling 800-588-2300 or by emailing customersupport @ empiretoday.com. The company is a Shop-At-Home retailer offering quality, name-brand Carpet, Flooring and Window Treatments, fully installed pricing, a Low Price Guarantee, Professional Next Day Installation on many of its products and Financing With Approved Credit. Each purchase comes with an Installation Warranty along with a Manufacturer Product Warranty.
Show

Although your post is from 2008, I would like the opportunity to speak with you regarding your problems with your carpet and any issues you had regarding our professional installation. We are continually working to improve our customer service and if you are still interested, we would be happy to work with you to make things right. Please feel free to email us at customersupport@empiretoday.com or call me directly at 888-588-2315 x4195. Rebekah Clerk, National Customer Service Manager
author's review
ID
#127543 Review #127543 is a subjective opinion of poster.
Jul 15, 2008 User122558

8 months ago I had Empire install new carpeting in my home. While the installers were here I told them that I could see all the seams.

They said that as I vacuumed they would disappear. They have been here several times and tell me that it is normal. The carpet is matted down and looks like it has been here for years. They sent an installer here two weeks ago and he said that the seams were not right and that they had to contact the manufacturer to see if they had the same dye lot.

Someone would call me in 1 to 3 days. I still have not received a call. The carpet looks horrible.

I am very unhappy with the carpet and the service. All I get is a run around 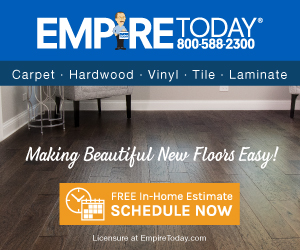 Don't Use Empire Today for Flooring

I apologize for your frustration with your installation experience and with our customer service. While we were not able to find your contact information from your post, we see that we were working with you. Although it has been a couple of years since this time, we would like to follow back with you and make sure you have been taken care of. Please contact me by email at customersupport@empiretoday.com or via phone at 888-588-2315 x4195. Rebekah Clerk â€“ National Customer Service Manager
author's review
ID
#121264 Review #121264 is a subjective opinion of poster.
Product
Empire Today Flooring
May 17, 2008 User117336

I had Empire Today install multiple flooring -- in one day. In summary, it was unprofessional, lacked any craftsmanship and frustrating due to the lack of their ability to speak English.

Unfortunately my attempts to correct any of the multitude of discrepancies were ignored. What I found funny about the entire matter was that Empire Today (i.e., a representative named Natalie) actually sent out a “crew” within a few days of my initial complaint. They arrived after 6:30 PM, were almost two hours late and unapologetic. They had no idea of the extent of the work required and I showed them all the discrepancies (e.g., hardwood flooring, laminate flooring, punctured heating system, trash, etc.).

The head of the crew was actually embarrassed, took pictures of all the discrepancies, stated they were unprepared to undertake the extensive repairs and said he would inform the “local office” to have them reschedule. I asked when I would hear from someone and he said tomorrow. Needless to say I heard from no one. After another week I called Al Rivera, a sales manager, at the “local office” and explained what happened.

He stated that he would “look into it and call right back.” He never called back. After another week I spoke with Natalie again and she promised to “look into it and call right back.” She never called back. After surfing the internet and reading the complaints, I realized I was taken by Empire Today and they were just another “high-pitch-sales and no service” company. I gave up on any expectation of Empire Today making things right.

Since I’m a disabled military veteran existing on disability, I had to pay someone else to fix all (i.e., those that could be fixed) these unexpected and unwarranted flooring issues. I paid for my mistake with the selection of Empire Today. However, I felt compelled to follow-up with a testimonial on the Empire Today web page. As expected it wasn’t a positive endorsement.

Within hours I was called by the “corporate office” (i.e., a representative named Helen). She told me she would ask about recompense. The next day she called me and said the “regional office” was “looking into it.” Helen called back the next day and stated that Empire Today would only pay for the trash removal and not the flooring discrepancies – since I paid cash and had no “paperwork”. I requested that she have the “regional office” manager call me and explain why Empire Today did nothing to correct THEIR mistakes for over six weeks.

She said she would pass on the request. Within hours Tim Sherwin, the “regional office” manager called back. Our first conversation wasn’t positive – he attacked my integrity, was condescending, attempted to belittle me and was certainly uninformed. He kept referring to my “alleged” discrepancies and I told him to look at the pictures “his” crew took before he said “alleged” again.

Tim Sherwin called back the next day and his attitude was even worse. I found it odd because he still hadn’t looked at the pictures his own company took. I found him arrogant and disrespectful as well as uninformed and told him so.

He said he would “look into it and call sometime next week.” I told him I was very disappointed with the way I was treated and being treated by Empire Today and was going to inform his endorsers, sponsors and potential buyers of my experience. His response, “do whatever you want to do.” MY ADVISE – DON’T USE EMPIRE TODAY.

dont use them they put they show you one wood and put another. They put the wrong one in our house.

I am so sad. They havent called to tell me how they will fix it . They stained my couch with black oil. The did a *** job on the corners.

'Thank you for brining your concerns'? :?

Your email address is protected because you don't won't to communicate with anyone.

Thanks so much for your comments as I've seen more than enough to change my mine about doing business with Empire Today.They advertise all over TEXAS and I was just about to call them. I just so happen to look them up and so this website and boy am I glad.

I will proceed to Home Depot where I know for sure I will get quality work as well as good customer service.

I have used them before. Again, Thanks alot and I hope the millions of people use this site and refuse to use them will put them out of business.

:eek WOW! Thank you for informing someone like me who WAS going to call Empire but definitely AM NOT going to now!

Thank goodness I checked into the testimonials.

I tend to believe the negative ones. The company can certainly write all the positive ones they want but only negative ones come from real people that did not get what they paid for!

Thank you for brining your concerns to the attention of Empire Today. Empire Today is dedicated to providing world-class customer service to every customer.

We are currently looking into the concerns mentioned in your post. Please feel free to contact us at CustomerSupport@empiretoday.com for further assistance.