879 Company responses
11 Customer testimonials
Get a quote Call customer care
Write a review
A leading provider of installed home improvements and home furnishings for over 50 years in over 45 major metropolitan areas across the United States. Empire Today Customer Service Team is there to assist every customer - they want to hear when customers are happy and they want to hear if there are any concerns that need to be addressed. Prior to posting on this site, please contact a member of their Customer Service Team directly first, they can be reached by calling 800-588-2300 or by emailing customersupport @ empiretoday.com. The company is a Shop-At-Home retailer offering quality, name-brand Carpet, Flooring and Window Treatments, fully installed pricing, a Low Price Guarantee, Professional Next Day Installation on many of its products and Financing With Approved Credit. Each purchase comes with an Installation Warranty along with a Manufacturer Product Warranty.
Show
AdSome advertisers may pay us for this ad to appear on our website or provide us with a referral fee. Our content is free because we may earn a commission if you purchase products after clicking ads on our website.

Empire Today Does Not Do Quality Work

Customer satisfaction is our number one priority, and we strive to address all customer concerns from the start of their sales appointment to post installation.

We thank you for bringing your concerns to our attention, and regret to hear that you remain unsatisfied. We’ll be further investigating this matter, and we’ll be in touch with you soon.

Back in September 2015 I hired Empire to install LVT . I have had moisture issues since the installation.

Empire denies that the moisture due to a water leak resulted from them. I paid an extra $1000 to have the damaged tiles repaired. The repair work was never done properly. Tiles are popping up everywhere.

It's a tripping hazard. I have been fighting this issue for two years. No satisfaction. They have offered me $1000 to make me go away.

The assessor they sent out 3 months ago gave me a written assessment of the shoddy work the contractors performed. His suggestion was to rip the entire floor up and redo it, or else receive a full refund. Empire is not willing to do any of that in spite of the written assessment one of their employees left in my home.

My assessment of Empire Today is to stay away from them! I am wanting to be fully reimbursed.

Dear Jolene,
We are disappointed to hear about your experience and assure you that this is not the level of service that we expect for our customers. We understand that time has elapse since your posting, if you continue to have questions or concerns regarding your experience please email us at customersupport@empiretoday.com with both your concerns and account information.
Thank you.
author's review
ID
#922323 Review #922323 is a subjective opinion of poster.
Service
Empire Today Carpet Installation
Pros
Reason of review
Problem with delivery
Loss
$2000
Preferred solution
Full refund
Sep 20, 2016 Rollen

The week of 9/29 I had an empire sales rep out to my house to provide me a quote for new floors. I explained to the sales rep that since I am not made of money I really only want to cover the original tile in the living space.

His response was Empire will only do vinyl or carpet because my house was built in 1958 the floors are not level. He showed me samples of the vinyl which I was impressed with so I contracted with Empire to come out on 9/8 to install the vinyl floors. The day before the scheduled install 9/7 they called to verify that someone over the age of 18 would be available to greet the installers and let them in. The day of the original install date of 9/8 Empire called me not to give a time but to cancel the install without saying why.

Since my house was already ripped apart and belongings put away in prep for the install I was not happy but I rescheduled the install for 9/16 with a $1000 discount off the original price. As it turns out the 9/16 date was a "fake" date and it will either happen on that day or they will reschedule again. The vinyl installer showed up and took one look around and stated I can't put vinyl over these floors because in 6 months the grout lines would be visible through the vinyl so I canceled that install and called empire back. Now I am really angry that a salesman would sell me a product I could not use.

That salesman as I understand it no longer works for Empire which is good but in the meantime I am down 3 1/2 weeks and $1000 deposit with not even a prospect for a new floor. The woman I spoke to said she would have a new sales rep call me to schedule a time to look at laminate samples...the new sales rep called over the weekend and we scheduled 9/19 @ 5:30 at my home. Well he was a no show and no phone call either. At 6:30 I sent him a text and told him not to bother I am not doing business with Empire.

Now I am waiting for my $1000 deposit back and since they withdrew the deposit from my account I have to wait 3 to 5 days for my money to be returned to my account leaving me without new floors and having to wait for my deposit before I can contact another flooring company. This company SUCKS....their sales people are highly unqualified and they just really don't care about the huge inconvenience they have cost me over the last 3 1/2 weeks as I have dismantled my entertainment center in prep for the install and my house is a disaster and has been since this process started. I am done dealing with empire and if you are a smart consumer you won't do business with them either.

The only positive out of this whole nightmare was the honesty of the vinyl installer for which I am truly appreciative.

Hi Jennifer, we never want our customers to be disappointed in our service, and we regret that you felt pressured during your sales appointment. This is not the level of service we expect for our customers, and we understand that we've spoken with you about your experience. Please do not hesitate to contact us at customersupport@empiretoday.com if you would like to discuss this further. Thank you. Bill Allivato, National Customer Service Manager
author's review
ID
#810223 Review #810223 is a subjective opinion of poster.
Service
Empire Today Carpet Installation
Cons
Reason of review
Pricing issue
Mar 15, 2016 User810223

I made an appointment, asked if there was a minimum cost..told nope..I was going to carpet one very small bedroom as a test before hiring them, as I was unsure as of all I had read negative. Long story short, they get here tell me 650 dollar minimum..really, show me in writing where that is?

I told them I had already asked customer service that..he said no, it was his manager will not allow jobs for less..Slimy used car salesmen tactics..He could show me nothing..I threw both of them out slammed the door. Home depot is installing carpet

Helpful 0 Not helpful 1
AdSome advertisers may pay us for this ad to appear on our website or provide us with a referral fee. Our content is free because we may earn a commission if you purchase products after clicking ads on our website. 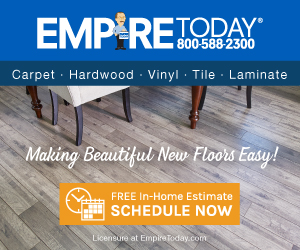 Empire Today - A PACK OF LIES AND THEIFS AND THUGS

Thank you for bringing your concerns to our attention. We regret the lack of follow up you’ve received, as this is not in line with the world-class service we expect for our customers. We would like to discuss the situation with you in more detail and ensure that everything gets resolved to your satisfaction, but we are unable to locate your account with the information posted here. Please call us at 888-588-2315 x4195 or email your contact information to customersupport@empiretoday.com, and we will follow up with you as soon as possible. Thank you. Jeanette Ramey, National Customer Service Manger
author's review
ID
#540119 Review #540119 is a subjective opinion of poster.
Service
Empire Today Installation
Sep 29, 2014 User540119

The sales process was down pat, this is a sales company only. the follow up and the customer service sucks!!!

The installer didn't even have a broom or a vac to clean the floor before the pad when down. new carpet and pad on a dirty floor. I guess this is cost cutting. carpet was poorly installed.

Have been calling for two week to try to get a invoice mailed or emailed to me. Good luck, just a bunch of smart ***. Had one manager tell me that he doesn't have access to email. He said I would have to call the Indianapolis branch.

we will get right on it. still no invoice and no calls.,

What is the email address for the Legal Department?

I've been calling to cancel and either get disconnected or stuck on hold for over a half hour. What is the email address for the Legal Department so I can cancel? Thank you.